Menu
Log in
Register
Navigation
Install the app
More options
Contact us
Close Menu
You are using an out of date browser. It may not display this or other websites correctly.
You should upgrade or use an alternative browser.

Before They Were Weaves - An Introduction to Precursors 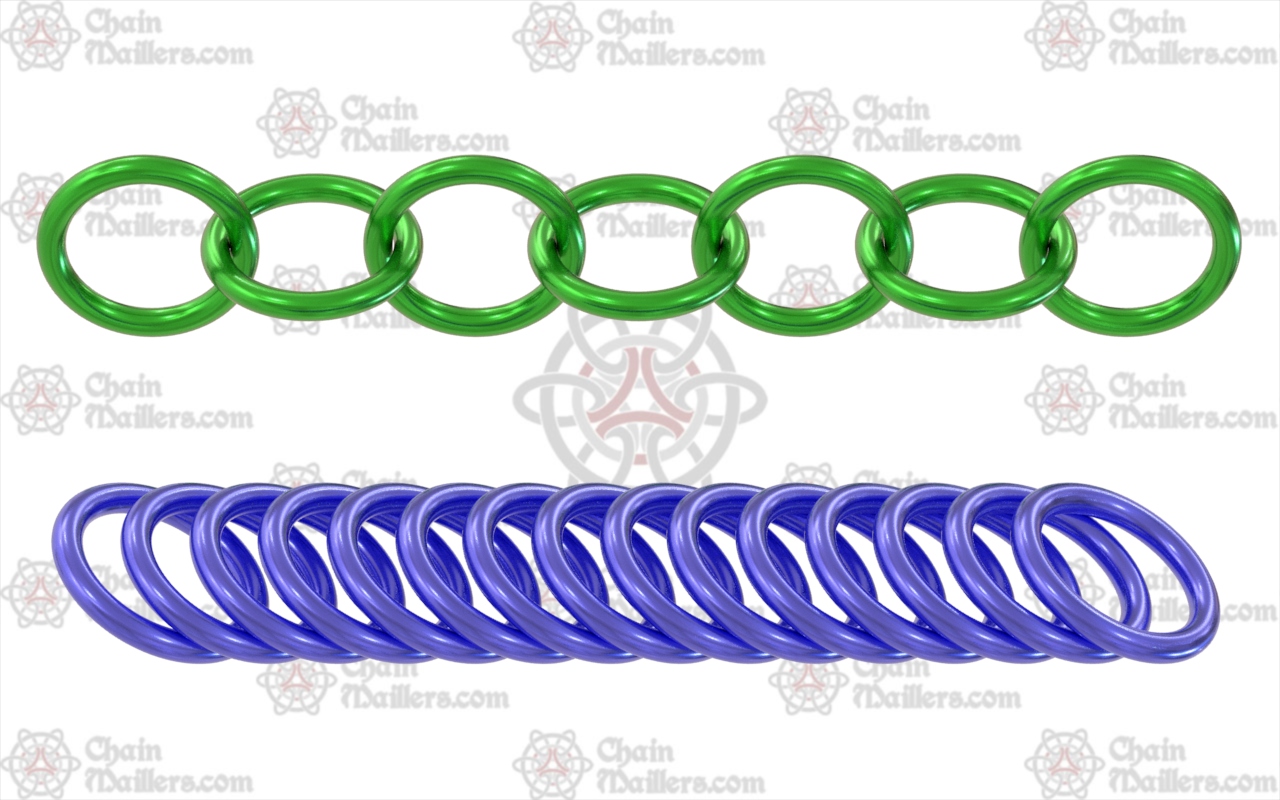 (fig. 1 - Precursor Category Examples)​
While looking through hundreds of weaves for entry into the Maillepedia, an observation was made that there were certain common repeating ring formations. Those common ring formations are what we are calling precursors. Precursors are a new concept (at least to our knowledge) in chainmaille. They can be found in all chainmaille weaves and are based upon the weaves' overall appearance. Precursors may vary depending on the axis that the weave is viewed at. As such, different precursors may be found in the same weave (much like different connection types) and they are viewer dependent (two people may not look at the same weave in the same way)

Due to their common, variable nature, precursors are not useful for any structural classification system. Their purpose lies in describing the visible forms present in a weave. Although precursors can be used as a base to build a weave upon, in most (if not all) cases, they are simply formed as a byproduct of cellular connections. In general, while precursors are part of the structure of a weave, they have no bearing upon it.

Precursors come in 2 categories, Chain and Unconnected, and can be modified or extended. The examples illustrated in this article are extended versions.​

While there are two categories of precursors, each of those categories have their own precursor types. 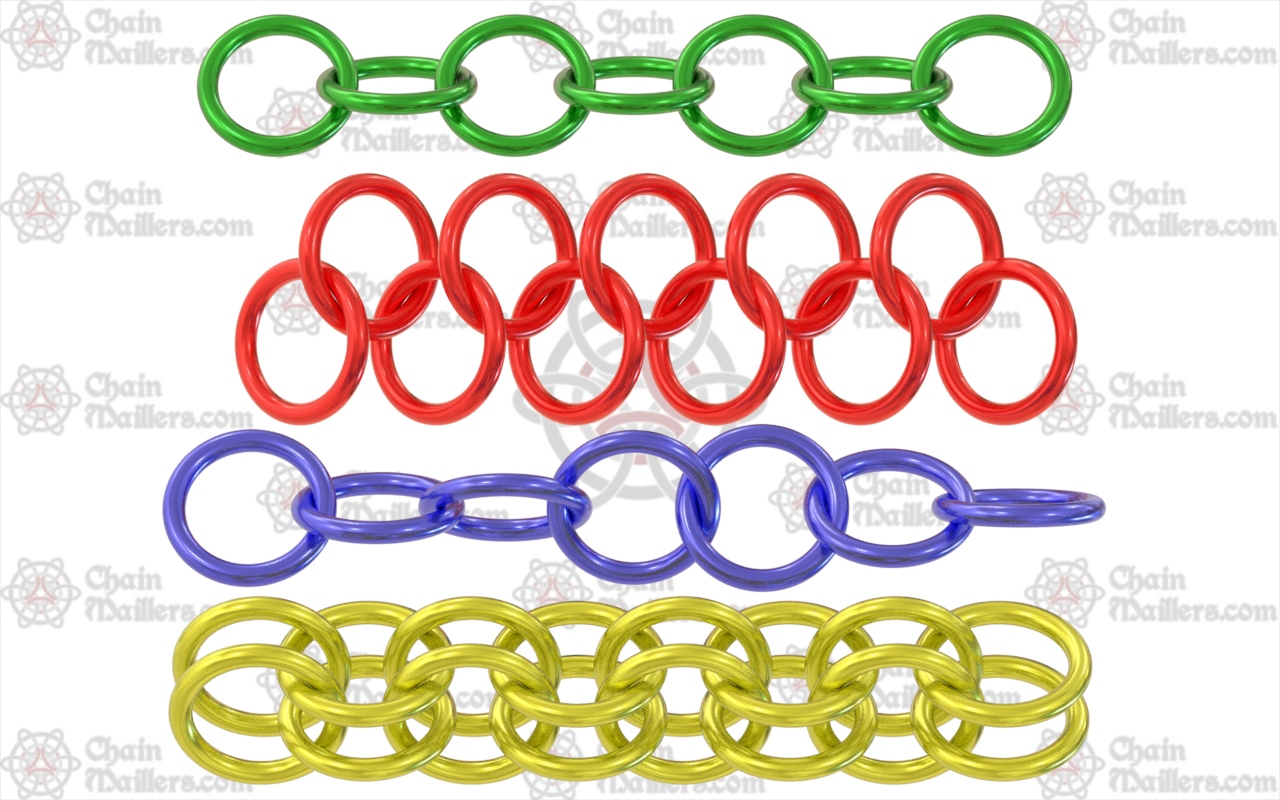 
Precursors are simple, and connected precursor types are based off of the simplest form of chain, the X in Y Chain.

Chain precursors are named after the formations that can be made with X in Y Chain. There are four primary types of connected precursors:​
Please Note: 2 in 1 Chain is used as the clearest representation of the connected precursor forms for simplification purposes. Technically any X in Y Chain can be used as they are all varying stacked modifications of 2 in 1 Chain. The stacked modification of 2 in 1 chain to 4 in 2 chain allows for the split precursor type.

(fig. 4 - Folded Precursor in Garter Belt)​
Folded precursors (blue rings in figure 4) are X in Y chain folded into what is easiest to describe as 2 rows of European 4 in 1 Sheet. While Vipera Berus is perhaps the most famous example of this precursor, it can also be found in other weaves including Mngwa and Persian Wyvernback. Folded precursors are very similar in appearance to the unconnected precursor staggered.

(fig 5. - Spiral Precursor in Pencil)
​
Spiral precursors (any color in figure 5) are similar to alternating precursors, however, in a spiral precursor, all rings rotate in the same direction as the adjacent rings in the precursor. Spiral precursors can be found in weaves such as Inverted Spiral, Locked Twist, and Abstain. 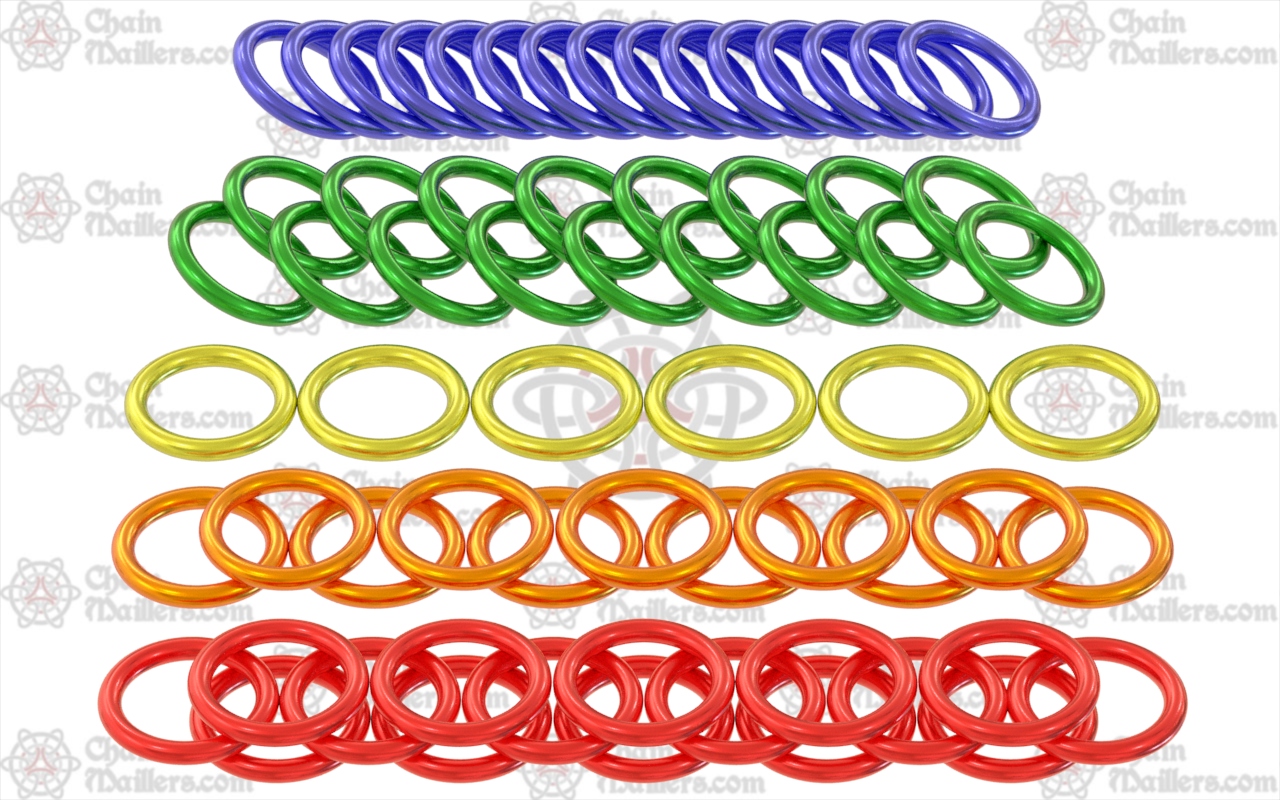 (fig. 7 - Unconnected Precursor Types)​
Chainmaille is all about connections, whether it's for classifying what family a weave belongs in, or deciding if a weave is newly rediscovered or a variant of something previously documented. However, as important as connections are, if you take them away you are, sometimes, still left with easily identifiable ring formations. Those ring formations are unconnected precursors.

There are five primary types of unconnected precursors:​
Note: While all of these types can technically be considered "offset" (including adjacent which is explained further in the article), they are given different names for ease of identification.


Offset precursors (blue or green rings in figure 8) are commonly found in weaves classified as European or Persian. In straight offset precursors, the degree to which the individual rings are offset will determine whether or not an eye is created. They can be easily seen in weaves such as European 4 in 1, Forars Kaede, and Hilt.​

(fig.10 - Adjacent/Axis Precursors in Inverted Round)

​
Adjacent/Axis precursors (blue or green rings in figure 10) are technically a truncated version of a parallel precursor consisting of one layer of rings. They are commonly found in "round" and "gridlock" types of weaves. In "round" weaves they fold upon themselves around a central axis. In "gridlock" weaves, they form an oscillating pattern. Examples of weaves where adjacent precursors can be found include Gridlock Sheet and Inverted Round.


Parallel precursors (blue rings in figure 11) are 3 layers of stacked rings where the layers are offset from the adjacent layers. These precursors are commonly visible in weaves designated as Helm or Celtic. Celtic Visions, Harvest Moon, and Liberto Chain are examples of parallel precursors.

Parallel precursors overlap with the connected precursor split if the connector rings are taken into account. 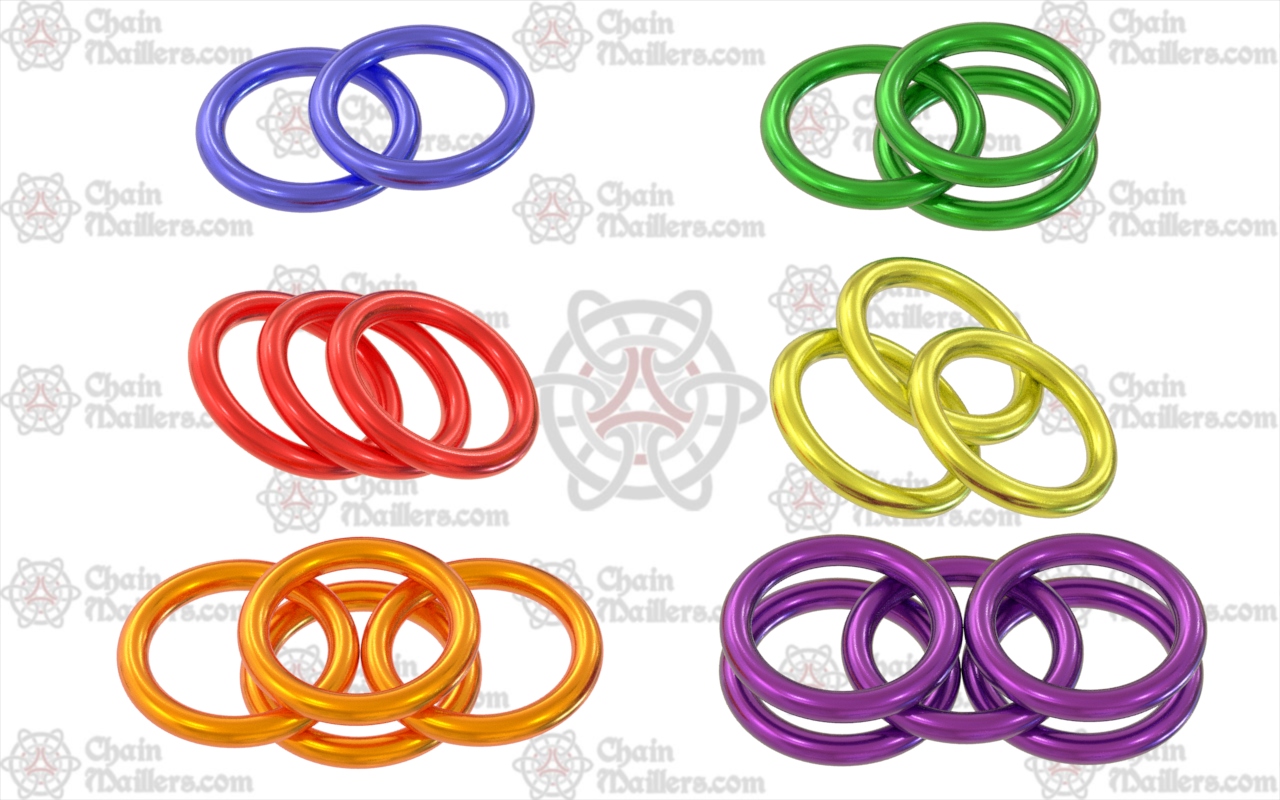 
In the introduction we mentioned that all precursors in this article are the extended versions. We did want to at least show you the base versions of the unconnected ones.
​
Base connected precursors will be the basis of their very own article. (coming soonish)

The purpose of this article is to introduce the concept of "Precursors" and to give you the means of finding them on your own. It is not meant as an exhaustive dissection of the concept, or to list each and every precursor.

As Precursors are a new concept, we expect there to be changes and clarifications made over time. We encourage your comments, questions, and constructive criticisms both about the concept itself, as well as the names and definitions contained herein. Please feel free to join the discussion.

Thank you for taking the time to read this article. We hope you found it informative and that precursors will be of use to you on your mailling journey. Special thanks to @Phong (previously of cgmaille.com) and Dave Austin (from chainmailbasket.com). Without their tolerance of our incessant questions, precursors may have remained a passing thought instead of becoming a, hopefully, semi-coherent concept.